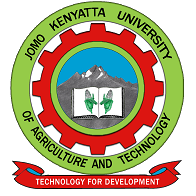 Jomo Kenyatta University of Agriculture and Technology (JKUAT) is a public university near Nairobi, Kenya. It is situated in Juja, 36 kilometres northeast of Nairobi, along the Nairobi-Thika SuperHighway. It offers courses in Technology, Engineering, Science, Architecture and Building sciences. The university has a strong research interest in the areas of biotechnology and engineering.

University Accomodation
The university offers accommodation to some of the students at subsidized rates. There are six students' hostels inside the school compound of which three are occupied by males and the rest three are occupied by females only.
There are three student dining cafeterias: the candle in the wind, main mess and the Hall six dining mess.

University Library
The university has a library that has a seating capacity of 600 students and it is stocked with 80,000 volumes. The library also offers other essential services like online services, reference, inter library loan, user-education, orientation, online information services, photocopying, binding and repair.

Our core values at Jomo Kenyatta University of Agriculture and Technology are:

Jomo Kenyatta University of Agriculture and Technology was started in 1981 as a Middle Level College (Jomo Kenyatta College of Agriculture and Technology (JKCAT)) by the Government of Kenya with the generous assistance from the Japanese Government. Plans for the establishment of JKCAT started in 1977. In early 1978, the founding father of the nation, Mzee Jomo Kenyatta donated two hundred hectares of farmland for the establishment of the college.

The first group of students were admitted on 4th May 1981. H.E. Daniel Arap Moi formally opened JKCAT on 17th March 1982. The first graduation ceremony was held in April 1984 with Diploma Certificates presented to graduates in Agricultural Engineering, Food Technology and Horticulture.

Bachelor of science Control and Instrumentation

Bachelor of Science in Health Records Management and Informatics

Bachelor of Procurement and Contract Management