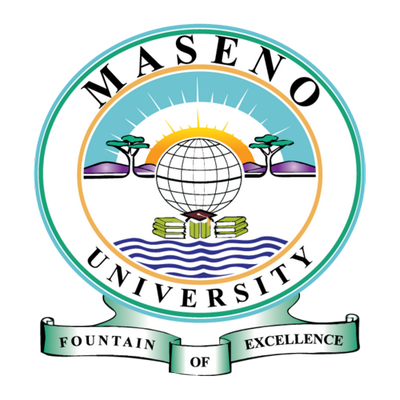 Maseno University founded in 1991, is the only university on the globe that lies along the Equator (00). It is one of the seven public universities in Kenya. The University is located in Maseno Township along Kisumu-Busia road, 25 km from Kisumu City and approximately 400 km west of Nairobi the capital city of Kenya. The University also shares its boundaries with Vihiga and Kisumu County.

Maseno University offers undergraduate and post-graduate programs in different disciplines at the following faculties and schools:

Alongside its academic programmes the University also manages enterprises such as the Kisumu Hotel and the University farm where it produces agricultural products which are used within the university and the surplus supplied to markets around.

Maseno University currently has four Campuses, a College and a Constituent College.

Maseno Main Campus is in Maseno Township 25km from Kisumu on the Busia road. The core activities and central administration of the University takes place on this Campus.

Homa Bay Campus is located at the SONYACO Plaza in Homa Bay town. Through this Campus, the University caters for the ever expanding demand for University education in the region.

The eCampus is one of the latest innovations by Maseno University to facilitate online delivery of high quality certificate, diploma and degree programmes to learners in various parts of the country, the East African region and beyond. All programmes offered at the eCampus are primarily delivered through the internet, with students taking sit-in on-campus examinations at the end of each Semester.

Maseno University is a modern institution of higher learning set up to advance teaching, learning, research and development that responds to the emerging socio-economic as well as technological and innovation needs of Kenya and the Eastern African Region.

According to the Vice-Chancellor, Professor Julius Omondi Nyabundi, Maseno University has embarked on a mission to develop and deliver academic programmes that not only respond to the needs of industry but also prepare workers for the knowledge economy, in line with the Vision 2030. The programmes offered by Maseno University (referred to as ‘With IT’ programmes) ensure that all graduates of Maseno are adequately exposed to a knowledge-base that enables them to live, learn and work in a multi-disciplinary setting where ICT is as much a resource for learning and working, as it is a discipline in its own right.

The name "Maseno" was coined by Rev. J.J. Willis out of the name of a tree known in local dialects as "Oseno" or "Oluseno" that stood next to the spot where the first missionaries in the region erected their base.

Maseno University’s history begun with the merging of Maseno Government Training Institute (GTI) with Siriba Teacher’s Training College to form Maseno University College as a Constituent College of Moi University. This led to its subsequent gazetting in October 1990 crowning the two institutions’ several decades of meritorious existence. It became a full-fledged University 11 years later, in 2001.

Master of Science in Pure Mathematics

Master of Science in Applied Mathematics

Doctor of Philosophy in Applied Mathematics

Doctor of Philosophy in Applied Mathematics

Doctor of Philosophy in Applied Statistics

Doctor of Philosophy in Pure Mathematics