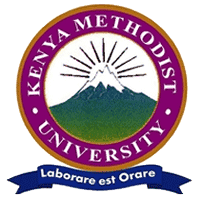 Vision : To be a world class Christian University raising a generation of professionals and transformational leaders.

Mission:  To contribute to the transformation of our society by providing high quality education that promotes excellence in scholarship, research and selfless service.

Our Philosophy : The University’s philosophy is to foster the intellectual, spiritual and physical development of the wholesome individual in order to recognize and utilize the available opportunities for enhancement of human development with the appropriate recognition and respect for other creations. This philosophy is therefore based on the belief that God is the creator of Heaven and earth, and the fountain of knowledge, and that the application of knowledge and skills should be guided by Christian values and principles.

Slogan : The future is here

Objectives of the University

The University’s mission is achieved through the following broad objectives:

KeMU is Celebrated for…..

Our Cost : Having a competitive course structure. Our fees has now been reduced by 15%.

Our Approach : Innovative and experiential learning, aimed at bringing transformation.

Employers Choice : Producing graduates who are employable in the market according to recent survey done by Corporate Staffing Services.

Our Faculty : Dedicated and highly rated faculty who draw on their own research.

Our Research Grants : Attracting research finding of over Ksh.50 Million, for academic research.

Our Philosophy : Fostering intellectual, spiritual and development, of the whole individual.

One of our countrys new gems in the education sector, Kenya Methodist University (KEMU) was awarded its Charter on June 28th 2006 by His Excellency President Mwai Kibaki.

The coming of KEMU in Meru was a long process in educational planning and development. The Kenya Methodist University came as a logical step toward educational excellence as the focus of the Church in pursuance of its holistic Gospel. However, the University was not established as an isolated project.

At least two institutions namely; Kaaga Rural Training Centre and Methodist Training Institute consecutively formed the basic foundation, in form of physical and other infrastructure in the establishment of Kenya Methodist University. With an increased population, rising unemployment of the youth and poor land use in the 1950s, local church leaders hatched the idea of training local people to become self- reliant through training in agriculture, motor mechanics and carpentry. Consequently, a local committee was formed and funds were sought from Christian Aid in Britain through the NCCK to develop a training centre.

The Meru Country Council leased 54 acres of forestland close to Kaaga in Miriga Mieru to house the proposed centre. In 1956, the ground was cleared and the following year the first physical infrastructure was established comprising a hostel, offices, dinning hall and kitchen, meeting room, three staff houses and two duplexes along with a workshop and animal farm house. In 1958, the Kaaga Rural Training Centre was born for the purpose of training people and providing skills that would promote self-reliance.

At the MCK Annual conference held at Shanzu Teachers College, Mombasa in 1986, the then Presiding Bishop, (Rev. Dr. Lawi Imathiu) publicly announced a vision to establish a University sponsored by the Methodist Church. In 1987 the Methodist Church in Kenya formed a working party to study the possibility of establishing a Methodist University. At a later date the working party formed three sub-committees to deal with Programmes namely, Academic, Finance and Documentation Committees. The Academic committee was chaired by David Mwiraria. Other members were Prof. Mutuma Mugambi and Prof. Zablon Nthamburi. The Finance Committee was chaired by Mr. F.T. Nyammo with Rev. Dr Brenchly chairing the documentation committee. It was later in November 1988 that the committee met with Professor J. Mungai, the then Commission Secretary to the Commission for Higher Education (CHE), to discuss the accreditation procedures and to seek guidance on making a formal proposal to the Commission.

In 1991, the Trust Deed for the establishment of the proposed University was drawn up by the then-to-be Hon. Justice Aaron Ringera. In the same year, Staffing, Start up Curriculum, Library Development and Financial Development Plans were developed. These were presented to, and reviewed together with the Commission for Higher Education.

In 1992, the draft proposal was completed and approved by the Commission for Higher Education. This paved way for visitation by the Commissions Technical Committee. Funds were raised to build an office block and to sink a borehole. A chlorinating unit for piped water was also installed. This undertaking took nearly four years to complete. The kind-hearted Brotje Family from the USA donated 50,000 US Dollars to renovate the kitchen and dinning hall. The Family gave a further 200,000 US Dollars for putting up a library. Because the library fund was insufficient, a fundraising committee was set up under the chairmanship of Jacob Mwirigi.

In 1995, Prof. Mutuma Mugambi was appointed a pioneer volunteer principal of the proposed University. Both Prof. Mutuma Mugambi and Rev. Dr. Lawi Imathiu were requested by the Board of Trustees to accelerate the pace of the University project. The University project continued to attract international and cross-cultural relations with peoples of the world. The major non-Kenyan actors were from the United States, Korea and Britain. Friends of the proposed University from Richland, Washington State,USA, visited Kenya and shared their views on the University idea. Top on the agenda was the establishment of the Kenya Methodist University Development Association (KEMUDA) to raise funds in the USA for KEMUs growth.

In June 1995, Bishop Imathiu paid a visit to the United States and met the Richland friends and members of the United Protestant Church (CPU) to formally establish KEMUDA as a non-profit fundraising organization for development of the University. Some of the early noteworthy support resources from KEMUDA included large consignment of books, computers, medical equipment and funds to help with operations and scholarships. KEMUDA also helped to identify and send volunteer teaching and engineering staff.

On December 16th 1995, a major harambee was held in which H.E. former President, Daniel Arap Moi officiated and helped to raise Kshs.20 million to complete some of the ongoing physical structures. Meanwhile, KEMU had continued to attract support from the Korean Methodist Church movement under the leadership of Ms.Maria Um. She helped to organize financial support from the Methodist churches in Korea toward construction of a women hostel, the acquisition of a minibus and the construction of the University Chapel. The British Methodist Church movement also provided support in various ways such as seconding Prof. David and Rev. Elizabeth Dunn-Wilson to KEMU, as lecturers in the Department of Theology.

On 9th June 1997, the Commission for Higher Education granted a Letter of Interim Authority, giving an approval for the establishment of Kenya Methodist University. The Authority paved way for the creation of Academic programmes. The University opened its doors with 11 pioneer students, 3 in Theology and 8 in Business Administration programmes. During the 1997/98 Academic Year, an inauguration ceremony took place and Prof. Mutuma Mugambi was installed the Vice Chancellor on 31st January 1998.

Prof. Alfred Mutema was appointed as the 2nd Vice Chancellor of KeMU on 15th February 2010 and installed on 25th March 2010. A distinguished scholar, author, brilliant thinker, strategist and exemplary leader, he has led the University through a phase of rapid growth and development, increasing the student population to over 9000, 2 Schools, 3 faculties, 19 academic departments and more than 550 members of staff.

Bachelor of Science in Information Science

Bachelor of Science in Applied Biology

Bachelor of Science in Health Nutrition and Dietetics

Master of Science in Nursing Education

Master of Science in Finance and Investment

Master of Science in Agriculture and Rural Development

Master of Education in Guidance and Counseling

Master of Arts in Mission Studies

Bachelor of Science in Agriculture

Bachelor of Science in Nursing

Bachelor of Arts in Counseling

Bachelor of Science in Community Health